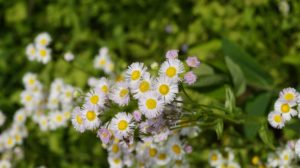 Whilst walking on a pleasant Sunday afternoon in the area of the Big Slackwater Restoration, many beautiful wildflowers were in bloom. This is in the area of Dam #4 to McMahons Mill where the C&O Canal enters the Potomac River to avoid the cost of removing enough cliff side stone to build the canal. Dam #4 was built not only to provide water for the Canal downstream of this point but to also raise the water level in the section upstream of the Dam to make canal boat navigation in the river possible.

Nowadays it is often difficult to visualize the Potomac River’s appearance before the Canal was built, in places it was quite different than it is now. This area was prone to flood damage during the Canals years of operation and part of it, upstream from McMahons Mill still is in periods of high water. In 1972 flooding due to a hurricane, and more damage during a flood in 1996, damaged a 2.7 mile stretch of towpath making it impassible and necessitated a long and dangerous detour on local roads for through-travelers.

The National Park Service, with financial help from the State of Maryland and the C&O Canal Association, performed a magnificent feat of engineering and restored this area, opening it for travel in October 13, 2012. Parts, where possible, were restored back to the original dry laid stone towpath, but in most of this area this was not possible and a suspended concrete towpath was constructed. Due to the meandering nature of the river in this area as well as the high cliffs along much of it, there are some truly magnificent views here. With its cliffs and caves and wild nature this area was one of Arthur’s favorite places on the C&O Canal.

Now, I don’t know too much about wildflowers (animals and trees, yes, flowers no) except that I like them and I often take far too many photographs of them, so don’t expect any pearls of wisdom, just enjoy.

There are no upcoming events at this time.