One Year Without Arthur 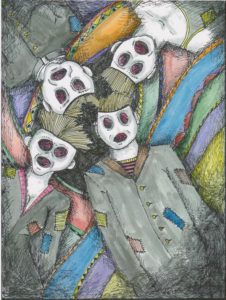 I’m not a big fan of poetry, I tend to gravitate more to prose, especially more philosophical works. But sometimes poetry can get an idea across better than any other form of writing. Like any form of expression, be it fine arts, theater, music, or the spoken word, great writing should transcend the context in which it was written. To me one of these great pieces of writing is T.S. Eliot’s poem  “The Hollow Men”.

If you research this poem a little bit you can find different interpretations of what Eliot intended to say and what things influenced his creative process. But despite all of this literary speculation and analysis no one really knows for sure what the ever elusive Elliot was trying to say with this work; which is as it should be. Great writing should affect the reader from their own point of view and contextual circumstances. Two things that are important to know about the poem, however, are that Joseph Conrad’s book, “Heart of Darkness”, (a magnificent work about morality, choices, and the descent into madness) and the horrors of the First World War and its aftermath, influenced Eliot greatly when creating “The Hollow Men”.  The poem is kind of long, and it is full of disturbing images and thoughts. But it is important to read it if you never have if for no other reason than to make yourself think about what is going on around you in the world. Many shy away from disturbing thoughts not wanting to think about the possibilities that those around them may not be what they appear and those standards we hold ourselves to may not be the best way to think about how we travel through our lives.

I.
We are the hollow men
We are the stuffed men
Leaning together
Headpiece filled with straw. Alas!
Our dried voices, when
We whisper together
Are quiet and meaningless
As wind in dry grass
Or rats’ feet over broken glass
In our dry cellar

Those who have crossed
With direct eyes, to death’s other Kingdom
Remember us—if at all—not as lost
Violent souls, but only
As the hollow men
The stuffed men.

II.
Eyes I dare not meet in dreams
In death’s dream kingdom
These do not appear:
There, the eyes are
Sunlight on a broken column
There, is a tree swinging
And voices are
In the wind’s singing
More distant and more solemn
Than a fading star.

Let me be no nearer
In death’s dream kingdom
Let me also wear
Such deliberate disguises
Rat’s coat, crowskin, crossed staves
In a field
Behaving as the wind behaves
No nearer—

Not that final meeting
In the twilight kingdom

III.
This is the dead land
This is cactus land
Here the stone images
Are raised, here they receive

The supplication of a dead man’s hand
Under the twinkle of a fading star.

Is it like this
In death’s other kingdom
Waking alone
At the hour when we are
Trembling with tenderness
Lips that would kiss
Form prayers to broken stone.

IV.
The eyes are not here
There are no eyes here
In this valley of dying stars
In this hollow valley
This broken jaw of our lost kingdoms

Sightless, unless
The eyes reappear
As the perpetual star
Multifoliate rose
Of death’s twilight kingdom
The hope only
Of empty men.

Not with a bang but a whimper

To me this poem is a dire warning; it is so easy for humankind to become hollow men, or hollow people if you prefer. Ignoring the moral obligation we all have as sentient beings to help each other and behave in a beneficial manner not only to each other and to our own society but the world on which we live. Hollow people are everywhere, we all know them, they have the desire to control us for their own ends or just to appear to fit in with their compatriots. They will crush those that are different or don’t conform to some falsely perceived societal norm just because they can. They do this out of fear of becoming one of the “different”, fear of not “fitting in” or just out of selfish petty meanness. They choose to take the easy path, subdue what they know is right in their minds for what other hollow people tell them is correct thinking, or they choose to do so for their own selfish un-thinking lusts and desires despite the consequences to others around them.

It has been a year since Arthur left us. I wish I could understand why he made the choice he did, but I probably never will. He kept so much from me that I could have helped him with. I do not approve of or condone his choice, but at least he had the courage to make one. My son was full of life and wonder, he had the ability to see the world in a unique and wonderful way, which makes his choice even harder for me to understand.

Perhaps he saw something more than I am able.

I just miss him terribly.

Hollow men stuffed with straw took him from me.

At least he didn’t go out with a whimper.

I just miss him terribly.

I wish I could say that living with the loss of Arthur has gotten easier over time, but it hasn’t, if anything it has gotten harder for me. So many things that intertwined our lives together are now just a glaring empty spot in my mind with raw, ragged edges. I try to focus on the happy memories and the odd sense of humor that he and I shared, but then I come to the realization, yet again, that he is gone. 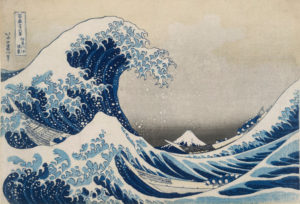 As I sit here writing these words I look up occasionally at a print of Japanese artist Katsushika Hokusai’s woodblock print the Great Wave at Kanawha, one of my favorite pieces of art. I often feel I am on the crest of that giant wave swimming furiously to stay on top of it and avoid the watery crash should I fail. I know that for myself if I don’t keep busy I will fail, staying in motion keeps me relatively stable. But sometimes I just think I’m not that good of a swimmer. In the background of the woodblock you can see as a counterpoint to the massive wave in motion, the solid serenity of Mt. Fuji. This reminds me that I must be strong and solid for the rest of my family and friends who are going through the same loss I am. Funny how art reflects life so well.

If you’re reading these words I’m probably preaching to the choir, you would not have gotten this far if you were hollow or stuffed with straw. So ‘ware the hollow men my friends, they are everywhere. Your choice is to do what is right, help those in need when you can, don’t impose your beliefs and values on others, and fight when you have to. Choose to see the beauty in the world and its creatures, look with wonder at the small and the large, everything is a balance, and it is our sacred moral duty to maintain that balance as best we can. Be a good example for others. This is how we honor and serve the memories of those we have lost, this is how we avoid becoming “Hollow men stuffed with straw”.

As above, so below.